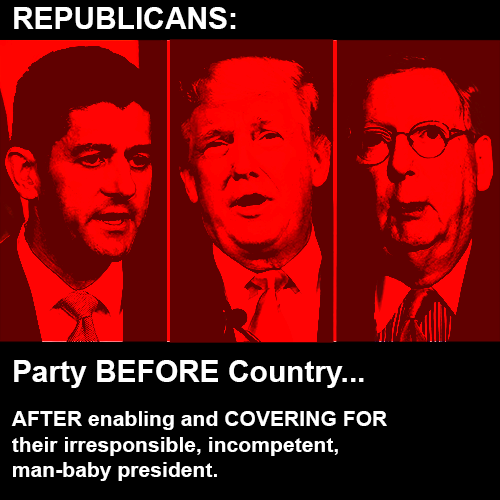 Republicans, you never again get to claim the moral high-ground regarding “fiscal responsibility”. EIGHT years of your congress bitching non-stop about Obama’s vacations and housing!

Now you are silent while Melania racks up 300k-500k PER DAY to live at Trump Tower, and Trump takes his FIFTH vacation to Mar-a-Lago. Where is your same outrage at the waste of money and shirking of duty?

Partisan hackery? Thy name is GOP.

Never again do you get to claim to be the “fiscally responsible” party, or even the “patriotic party”. You are exposed as opportunistic liars who brazenly ignore the SAME behavior from Trump that had you rabidly frothing at the mouth from Obama. If it was so wrong for Obama, why isn’t it wrong from Trump.

Republicans: Party BEFORE Country… AFTER enabling and COVERING FOR their irresponsible, incompetent, man-baby president.