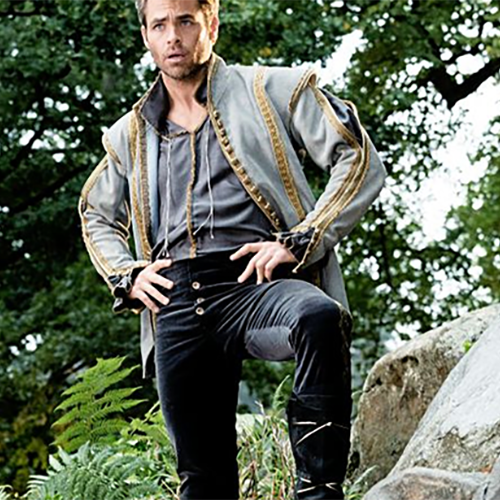 I saw “Into the Woods” recently with my daughters. Overall, I give it a B-. For the most part it was fine, although with a couple poor performances.

Before I get into the vocal performances, let me just make this global observation… If you need THAT MUCH AutoTune to make your performers sound good, you cast the wrong performers. There is an ocean of excellent singers in the theater and film arena. People who have been singing professionally for decades, and could knock out any Sondheim tune in his repertoire with ease and perfection.

In some cases, I think the sound engineers just added it JUST TO ADD IT where it should not have been needed. They AutoTuned Christine Baranski! She is only an Emmy and two-time Tony Award winning singer and actress. To quote Garth, “That chick can wail!” No need to make her sound like a computer.

There was a preview prior to the start of the movie for “Pitch Perfect 2” which had so much AutoTune running that the singers sounded like a cross between Stephen Hawking’s speech computer and a 1970s Hammond Organ. No one wants to listen to a robot sing. Let natural (and hard-worked-for) talent shine.

Meryl Streep was OK as the Witch. I have heard her sing for real before, and I know from personal experience she is pretty good. She was no Bernadette that is for sure. In the movie, Meryl in the earlier songs was pretty weak in her delivery. I noticed that they rewrote some of her lines to be in a lower register which pulled the punches of some of the climatic parts of the songs.

It was hard to tell if she was trying to play it a little slap-sticky, menacingly, or if she was trying to channel a little Robin Williams into it (too soon?), but her opening number was just…. off. Later on, though, she seemed to find some mojo. When she was singing to Rapunzel to stay, I finally saw her dust off a little magic, and she did very well. By the time she was singing “Last Midnight”, she seemed to be on a good path.

Overall, an OK performance, but I wanted so much more from the Witch.

OK, I have heard Anna Kendrick sing and she is unquestionably talented. No difference here. She does legitimate justice to the Cinderella role. She knocks out the songs with some decent power, and she can sell the emotion of it. AutoTuned? Yeah. But not so much that it felt inauthentic. I liked her in the role, and she interacted well with her other players.

She fumbles the comedy here and there, but I’ll talk about that in a minute. So I think she was a solid Cinderella.

I must admit that I approached the prospect of Emily Blunt as the Baker’s Wife with serious skepticism. Joanna Gleason was how I experienced the role initially, and those were some serious shoes to fill. The role required solid singing, some good comedic timing, and some dramatic delivery skills. So I thought I would give a complete Mckayla Maroney to Emily’s performance in a big way.

But I didn’t. In fact, I thought Emily did really well. Was she perfect? Not at all. But I felt like she delivered a great balance of the music, the comedy, and the drama. Musically, she sang songs just fine. I loved her rendition of the “What Was That?!” song, where she played it with a kind of confused exasperated guilty pleasure (whereas I thought Joanna always played more as an internal rationalization meets realization).

But I will say this, her delivery of the comedy was a miss. The Baker’s wife has some excellent hilarious lines. But instead of playing them funny, Emily played them almost matter-of-factly. Missed opportunities when declaring that her husband is undoing a spell, or when she describes pulling yellow hair from a maiden in a tower. Emily played those lines almost completely straight. Meh.

I am going to apply that criticism to all the players (except Chris Pine). They all poorly represented the comedic lines. Their timing was off, their delivery was off. Red’s “You can talk to birds” line was played as mild surprise instead of sarcastic skepticism. The Baker saying he will care for his son… when he is older, was rushed and just not funny. The Wicked Step-Family lines were too fast, not enough beats to make the comedy work. And Meryl completely phoned it in on the comedy.

Which brings us to…

I laughed the whole way through the “Agony” scene. Chris Pine played it perfectly. Period. Just right on the edge of over-the-top, but with the naive arrogance that only nobility unchecked could deliver. And boy did Chris deliver. The shirt ripping, the wide dramatic gestures. This guy had his comic timing down pat. No question.

Musically, he did fine. He spoke-sang lots of his lines which seemed to work fine (not unlike Sacha Baron Cohen’s stellar performance in Sweeney Todd). Sure they dialed up the AutoTune on him, but it was only really noticeable on the long notes where you could pick up the lifelessness of the tone.

He pulled off the acting just as well. When he is with Cinderella near the end, although the Prince declares otherwise, you can actually see the sincerity as he says his goodbye.

Awful. Just really… god awful. She had ZERO emotion. Is she happy? Is she scared? Is she angry? Same face. Is she disbelieving? Is she nostalgic? Is she on fire? SAME. FACE. Like she was wearing a mask of herself that was slightly hinged so the mouth could move (not unlike Glenn Beck).

I wish I could tell you how her singing performance was. I really do. Unfortunately, I can only speak to the AutoTune-Dialed-Up-to-Eleven-ness of her singing. I kid you not, this girl was so over-synthesized that she sounded like the Speak-n-Spell from E.T. Shame on the people that cast her, shame on the people who recorded her, shame on the people who applied the fake-n-bake AutoTune onto what must have been a truly horrible performance. In order to need that much AutoTune over-applied, she must have had the vocal talent and quality of Carl from Slingblade meets the rusted-out muffler of a 1972 Buick Skylark.

Just horrible. A pox on all their houses.

Depp was great. I thought he did excellent justice to the “Hello Little Girl” song. He was funny and menacing and slippery, and hungry. He did some sing-speak of his lines but it worked well, I thought.

I loved Tracey Ullman’s portrayal. She was the perfect nagging mom, punctuated with occasional smacks upside the head. She pulled off the comedy and the character role with no less professionalism and success than we always expect of her.

The Baker, Jack, Rapunzel & Her Prince, The Step Family:

No need to really give these folks their own section. They were all fine. The Baker did a decent job. I thought his voiced lacked some richness, but otherwise, OK. The kid they got to play Jack was fine.

Too bad they could not have found some kid in the caliber of the one that played Toby in “Sweeney Todd”, but he was OK. At least he did not sing “Giants in the Sky” a half-step flat like the guy in the American Playhouse version, but that might have been the AutoTune ?

Rapunzel sang fine, but they either cut or misfired all the comedy around her refrain. Her Prince was fine, and shone brightly in the “Agony” scene. The step family was OK. They missed most of the comedy, and kept Christine’s light under a bushel.

Overall, they all did fine.

So I give it a B-. It could have, and frankly SHOULD have been so much better. They had all the pieces there to make something truly unique and amazing.

Instead, they just did something just pretty good.